Are You Married, She Asked

Today was a very long day. Getting a nearly normal bio-clock back, I got up at 0915 just to catch the ending of Grossology (one of my favorite TV series.) After eating a plain prata and an egg prata with Milo, I even enjoyed (seemingly) final episode of Power Rangers - Mystic Force: Mystic Fate II. It has a good story-line yet too many rangers. (Yes, I am a fan).
I went to bank to open a disciplined saving account then marched to Funan Digital Mall to hunt cameras for M* and her cousin. Her cousin wanted a Sony Cyber-shot and limited her budget so it was not a difficult choice. I just bought a W-180 at S$275 - a reasonable rate. For M*, I chose Fujifilm FinePix f200EXR.
Fujifilm FinePix f200EXR is highly recommended by www.dpreview.com for its lower price/performance ratio. In Dynamic Range (DR) and high ISO modes, it is nearly on par with the great Panasonic Lumix DMC-LX3 in spite of its a lower tag. With a large (1/1.6") sensor arranged in a specialized way, it is superior than many of its direct competitors. Since it is a Fujifilm product, it also have film simulation mode. 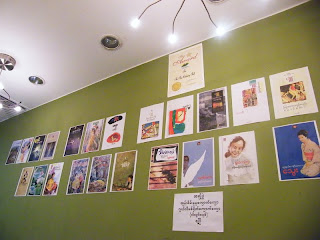 Interior Decoration of Loi Nine
After making those purchase, I crossed the road to make my way to Pennisular Plaza where Loi Nine - a Shan restaurantm - is. I was hoping to have vegetarian version of Warm Tohu on Shan Noodle but it was not ready at that time. I was too hungry to wait therefore I ordered Pickled Pork (Wet Ta Chin) and Steamed Pork in a Leaf-pack (Hin Htote). 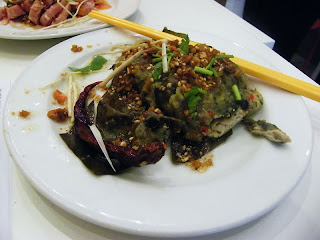 Steamed Pork in Leaf-pack (Hin Htote)
Hin Htote arrived first and I learnt that they are making it in Eastern Shan style - a big buck of meat with so small portion of onion shoots with no trace of rice floor. I wanted to have Southern Shan style Hin Htote with less meat, more onion shoots and rice floor. Eeek ! But it is tasty thought. Pickled Pork is also in Eastern style, no trace of pig blood and rice that I used to eat. They used mere meat. Eeek (again) ! 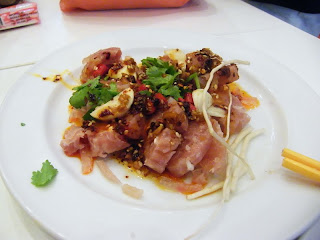 Pickled Pork (Wet Ta Chin)
After lunch, I made my way to my aunt's shop there. There were some guests - a family of three containing a mom, a dad and a daughter - were already there. During the conversion, the mother suddenly asked if I am married - what an awkward moment. It's wield. Fortunately, my aunt just handled the conversation wisely. Whoo !
Posted by Unknown at 11:31 PM