Today's lunch was all vegetable - green beans, bean sprout and a vegetable I can't name in English ("Gar Ra Khar Thee" or "Sukar Thee" in Burmese; both of which term refer/relate to Sikh ethnics but I don't know why). Then I got to rush to meet my supervisor. The meeting went smoothly.
Going back home, I went to the bank (the Clementi DBS branch) as the ATM nearby is crowded but the bank is clear. The counter staff denied my request to withdraw some money as I don't have my passport with me. In fact, I have my student pass with me with my photo on it. She told me that since anyone could rob my cards (the Master Card and the student pass) and memorize my secret PIN (and my signature), she must see my passport. What a ridiculous explanation in the sense that that same robber could also rob my passport :P
However, even if the robber rob my card and my secret PIN somehow, he/she can easily get money from the ATM (he/she must fool the camera by use of flu-mask too). What is the meaning of this ? In this logic, the bank's policy allow the robber to get money from ATM (up to $2,000) but it prevent him/her from getting the money from counter staff. Anyway, the money can still be stolen!
The truth is the bank policy was outdated - being set up before the time of ATM machines. The staff need to verify its customer using their other important document (NRIC or passport with photo) in order to reduce the chance of fraud and protect the customer. It worked well at that time (at the cost of introducing inconvenience to the customers whose other important document is lost etc) but nowadays, with the help of wonderful ATM, the customer is no longer protected. If the robber somehow get the card and secret PIN, the robber gets money.
The result - the customers who don't bring along their photo ID cards still can't get service but the robbers can cheat the bank/customer up to $2,000 (for those customers who lifted that limit it is $5,000). In other words, the protection scheme can no longer protect the bank/customer yet incurring a cost in POOR CUSTOMER SERVICE.
Starhub, also have this kind of problems (See my another post on Starhub Goes NUTS). When I complained using their web-based interface, I received e-mails and phone calls saying they would review their policies to improve their service. But I don't know whether they did or not. :P
For me, I got my money through the very ATM that is in the sight of that staff. So ridiculous. It is NUTS (No U-Turn Syndrome).
When I left the ATM for my shopping, a man was sick and fell down (he was still conscious though). One of the ladies around there made a call to 995 (the department in Civil Service for such case, 999 calls the cops). I noted the time as I'd like to know their response time. It may depend on the location but in this case, the ambulance was there no more than 4-5 minutes later. These civil service staff came with a foldable chair with their equipments. I admit I sincerely praise them. 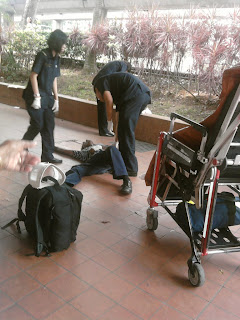 They were assisting the man on the ground. 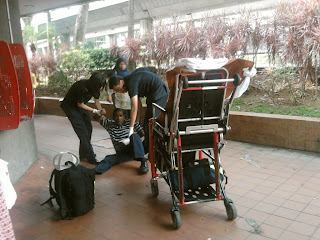 Then they raised him up. 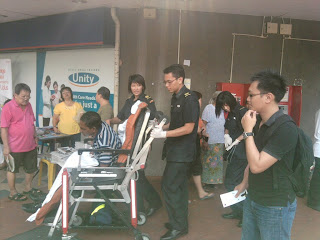 Off they went to the medical center.
Think about it, civil service can be said to be the monopoly in their market. If you fell sick or need help, either you call them or you die. They won't get a salary raise nor profit and they won't lose their job even if their service were poor. Yet, they tried very hard. In contrast, DBS and Starhub were in competitive markets (banking and telecommunication industries respectively). However, they were shooing away their customers by their outdated policies and a legion of NUTS staffs. How pity they are.
In 2006, I was admitted to a postgraduate degree in a local government owned and famous university. Both DBS and OCBC were giving tuition loans to the students like me. I went to DBS first (since I already had a saving account with them), to apply my loan. The staff asked me if I have my admission letter (the latter addressed to me saying "I am admitted to which course and the classes will starts on which day and such such things). Since I have already completed my registration formalities, either the university retained the original copy or I lost it (I couldn't remember), I only have my student card. They denied my application for incomplete documents. Isn't it ridiculous (again) ? Which school (especially government owned university) would issue a student card to those not admitted ?
In the end, OCBC won my business. So long DBS !
Posted by Unknown at 11:48 PM