All about Post-Production in Photography

In many arts - especially film and musics - post-production (or post processing) is an essential part. It is as important as pre-production and production. For example, for nowadays movies, average production span from 2-6 months while pre-production and post-production took quite long - as long as up to 2 years. In musics, pre-production includes writing the song, rough sequencing and arrangement etc, production is actual recording and post-production means mixing down the whole song with fine tuning the knobs. In short, post-production distinguish a lousy art from a state of the art production.
However, in photography, it becomes a controversial topic. Many traditional and conservative photographers - especially those who had much experience with film cameras - see post production as a mere error correction process. In my opinion, post-production is not about correcting the mistakes but enhancing and achieving what we can't achieve in real-life - may it be due to financial situation or technical limitation.
In many of my photos I posted in my photo blog (http://photo.lawshay.com), I performed post-production. The purpose is clearly not to correct my mistakes (made at the time of shooting) but to overcome technical limitations, to get something we can't get in reality and to make it more economical (for someone amateur like me). For example, take a look at this : 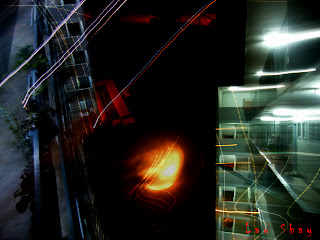 I was using a semi-pro digital camera (Fujifilm FinePix S8000fd). Therefore, it is clear that it cannot work as an old film camera where you can take multiple shots in one slot of film. To get this kind of images, post-production is a must. I couldn't also attach color filter to my camera so to make originally green apartments appear blueish, therefore, the apartments on the left is also a post-production effect. Apart from that, all, including the light lines (slow shutter-effects), were made during actual production. I thought I played quite fair as I am just an artist who demonstrate my vision using all the tools (camera + computer) I have.
In contrast, I had some photos, which used purely a camera effect (my camera was capable of this slow-shutter effect) without any post-production work (except the watermark of my name in Burmese). This one took me more than half an hour to grab this photo (running across the scene multiple time) : 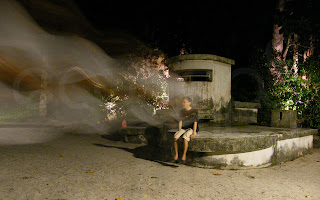 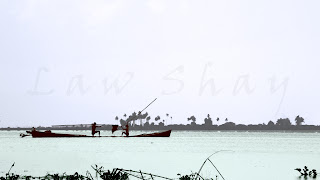 Another example, and the last one, would be the following photo : 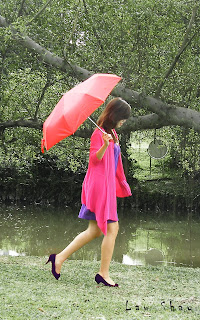 Originally, the model was wearing a pair of black shoes (take a look at this documentary for confirmation). The black shoes were not color-matched with her cloths. Since she's not a professional model and we were just amateur photographers, we couldn't afford a new pair just for this (I was talking in economic point-of-view). In other words, the situation was "Take it or leave it".
Many can sense the essence of this photo is the umbrella and the vibrant girl with colorful cloths (including a pair of colorful shoes). Post-production color-changes was the only answer or the black shoes will catch the viewer's eyes straight away. I also had to admit that the sun was pretty shining and the background was yellowish-greener than I wanted - I ended up with some more post-production color settings.
In short, post-production is not ruining the art of photography. It just enable the Impossible to be possible, difficult-to-achieve vision into reality and help financially challenged amateurs to produce high-quality artworks. On the other hand, I believe that relying too much on post-production is not an art. An artist should at least be careful about his/her white-balance etc.
Opps, I almost forget to tell you about my lunch. Today's lunch was roasted chicken with pasta and coleslaw. That was the only thing left in my usual pasta-stall. I hate Saturdays.
Posted by Unknown at 3:09 PM